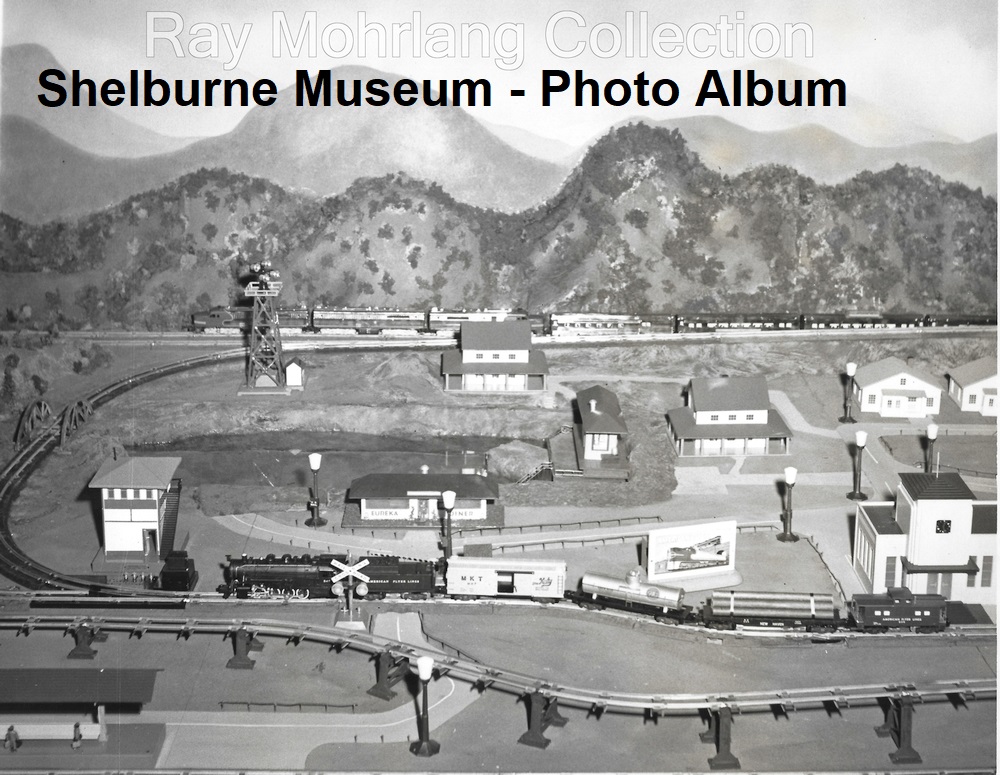 Electra Havermayer Webb and her husband were friends of A. C. Gilbert's as well as hunting companions on his various hunting trips.  Electra was quite wealthy and a collector of Americana.   She eventually established a museum on her estate in Shelburne, Vermont.   She decided that the museum should have an exhibit of toy trains to accompany the other toys in her collection.  She wanted the layout to represent the hills and other geographic features of Vermont.   What she initially got was a rather flat layout with only a backdrop planned to represent the scenery she wanted.   She objected vociferously and changes were made after she made it clear that money was no object.  For the full story of this episode, I recommend an article by Roger Carp in the August 1992 issue of Classic Toy Trains at page 55 and another update on that article in the March 2018 issue at page 50.

According to a notation on the back of one of these photos, they were taken in June 1954.  Since the work on the layout was had only begun in March of that year, I think it is likely that these photos were taken either prior to or during the process of making the layout acceptable to Mrs. Webb.  Among these changes were changes to the pond area, the elimination of the train shed, and an increase in the grade. The notations also indicated that the Wayside Station was eliminated.  From an examination of the photo in the Classic Toy Trains articles referenced above, it appears that the Wayside Station was replaced by a Mini-Craft Glendale Station & Newstand and only a boarding ramp from the trainshed survived.  The note also says that a house was eliminated, but I have not been able to identify it.  Possibly it was in a section of the layout that is not visible in the photo in the article.

It is interesting that this layout had such an extensive use of Mini-Craft buildings, since they were not offered in the 1954 catalogs.

To view the slide show, click on the photo or the button above.