If you couldn't get your layout in one box, maybe two boxes was the next best thing.  Creating that second box was the aim of these creative solutions.   The whole Layout in a Box concept made the assumption that in most cases there wasn't room for a permanent layout.  One major concern raised by that assumption was making set up, take down, and storage as easy as possible.  These 3rd party solutions definitely addressed that issue.  They also provided rudimentary landscaping which provided the basics of a creatively satisfying layout.

This was a third party product that was manufactured by the Tom Thumb Train Town Corporation of Waterbury, Connecticut.  It was an ingenious system that allowed you to fold a 4x6 layout down to fit in a 2x3 box with the track left mounted on it.  It was prewired to provide power to the track via spring contacts under the rails.  This allowed track to be removed at the joints of the layout and made it possible to remove the track pins at the joints in the panels.  In order to accommodate the track on the panels that had to fold inward, a small spacing panel was included at the joint of those two panels.   The panels when folded out do not appear to have had any framework to hold them in place allowing the addition of legs.   Apparently the layout was designed for floor use or on a table big enough to provide full support for a 4x6 layout.  The system provided hook ups for a wide variety of accessories, including the talking station.  The station operated as designed provided the direction of the train was clockwise.

I have never seen an actual example of this set which was sold to provide a place to set up the buyers own train set.   It would be interesting to see the materials of which the set was constructed and exactly how the "trimount" connectors worked.  If you have any other information on this set, please let me know. 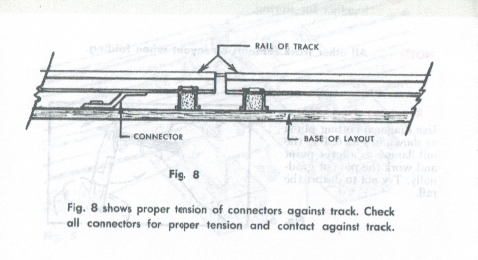 The Porto-Train-Pak provided an open layout of 76 x 48 inches, a little bigger than a 4 x 6 layout.  From the advertising illustration, it appears that the layout, which could be ordered for either American Flyer or Lionel trains, provided good scenic details.  The ad notes "colorful landscaping decorated with realistic earth for rough terrain, green grass, blue colored lake, winding roads, track road bed and pine trees."  The two corners of the layout provided compartments for transformers at either end of the layout.   This, they stressed, allowed both a father and son to operate their trains.  This would avoid the stereotypical scene of the father not letting the son, for whom the trains were purchased, actually operate the trains.   They also noted that the layout was wired for a second track as well as switch tracks, control tracks and accessories.   They even claimed that accessories could be permanently installed.   They didn't mention that the height of the accessories would have to be less than the combined height of the side pieces, which I would estimate to be no more than 4 inches each.   In any case, it was a neat idea and when folded up provided protection for the layout.  (Illustration Courtesy of Lonny Beno)