The New York Hall of Science

Opening Day Crowds at the Hall of Science in New York

The first and Largest of the Gilbert Halls of Science was located in New York City where Broadway meets 5th Ave.  The front of the building was on 25th Street.  This Hall of Science opened on September 17, 1941, almost 3 months prior to Pearl Harbor.  One of the major missions of the Hall of Science in its early days was to keep the American Flyer Trains and other Gilbert products before the public's eye during the shutdown of toy production during World War II.  The biggest attraction of these Halls of Science were the layouts, which were the largest American Flyer layouts of their day.  The ultimate layouts of which dreams were made.

Since this was the most well known of the Halls of Science, it is appropriate to say a bit more about it here before we visit the  layouts that were featured there at various times.  Aside from American Flyer trains, it featured all of the other Gilbert products on various floors.  For more details about it, I highly recommend two articles in the Train Collector's Quarterly by Bruce Manson.

The Dedication of the New York Hall of Science 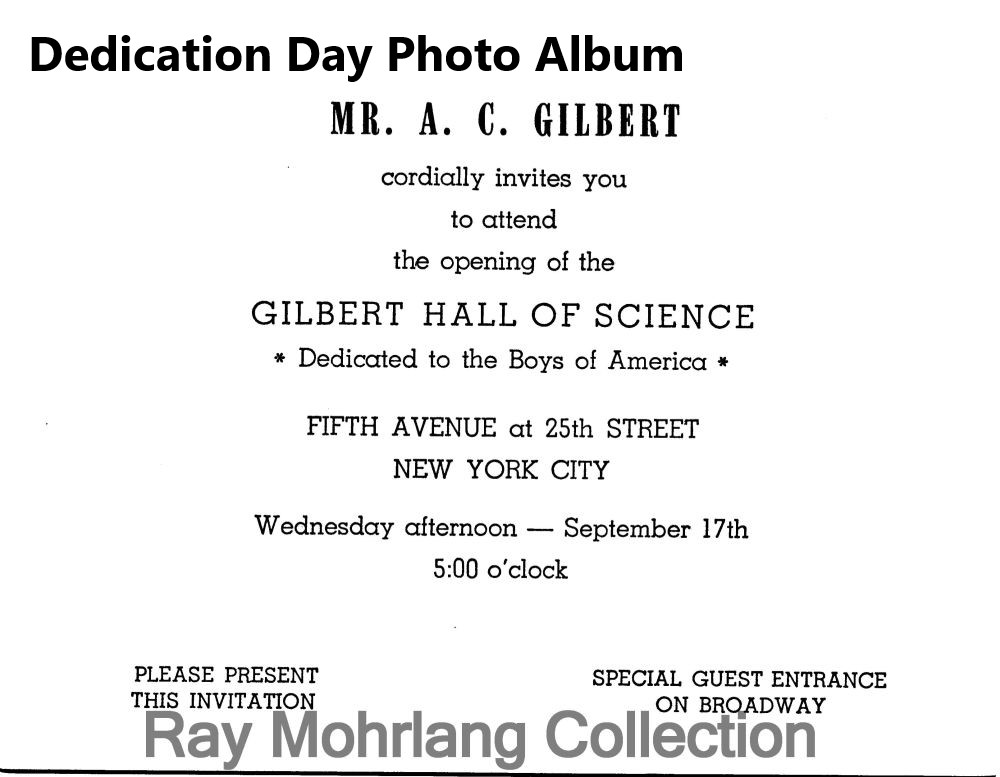 The New York Hall of Science was dedicated on September 17, 1941, though it is believed to have been open for operations since March of that year based on information Gilbert scholar Bruce Manson found in the toy industry press.  The Ray Mohrlang Collection has many photos taken on dedication day and they have been compiled into a slide show you can view by clicking on the invitation at the left or on the button above.

During the time that the New York Hall of Science was in operation from 1941 to 1958, there were a succession of layouts on the first floor, which were open to the public.  In total there were three major O or S layouts and some smaller layouts, including at least one HO layout.  Much of the information on the layouts was derived from the Train Collector's Quarterly articles by Bruce Manson cited in the footnotes of the sections covering each of these layouts.  Other information and photographs were obtained from Ray Mohrlang, the owner of a very large collection of photos of many Gilbert display layouts.  The articles are an excellent source of information on all three layouts.  We certainly need more information on these layouts, so if you can help by providing any information or photographs of these layouts, please let me know at the "Contact Us" link on the home page.

This layout was for advertising and promotion purposes and was not open to the public.  It was where buyers of major retailers were taken to be shown the latest American Flyer products.  Ironically, though, it is the one that is best preserved in the photos used in catalogs and other advertising and the filmed footage used in the Boys' Railroad Club television show.

When the Hall of Science first opened in 1941, there were two HO displays.  The first one was located behind glass windows on the first floor.  The second, was located in a kiosk made to resemble the front end of a GG1 locomotive.  In later years, HO train displays were incorporated into both the Super Layout on the first floor and the Sales Layout on the second floor.  For more details click on the links above.